The concept behind the Braket MTA  or better < Bra | Ket > MTA.

I won MTA at my very first boomerang tournament and got hooked by it. Right after I came home from Viareggio 2001, I started making my own. After some attempts using birch plywood, I started using some 2mm linen phenolic. I don’t know how, but I managed to make a fantastic Indian Ocean (design by Günter Möller) with which I was always able to get 35+sec. That boomerang is still a mystery to me. How could it fly, and be thrown so well while being so floppy? I soon bought some 2mm paper phenolic and the experiments started.

I went through all the sketches I had made from other peoples’ boomerangs, I made some terrible Indian Ocean MTAs and then I tried something different but still using 2mm phenolic. I made a Gradus (by Georgi Dimanchev) and a “variation” of it inspired by another boomerang called Dragon (by Jürgen Rode). I later called it Braket MTA or  to be more precise < Bra | Ket > MTA. 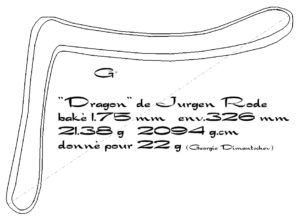 The experiment with the phenolic Gradus was not good but “the other one” was great. The size was right, a little bigger, the weight distribution was good for my style. It fell well in my hands and it flew great! 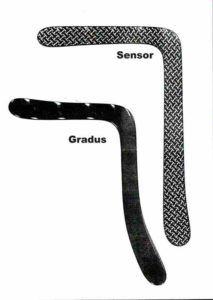 At the time I was studying quantum mechanics and < Bra | Ket > was not a typo, it is the brilliant notation developed to treat those weird problems using Bras (<Bra|) and Kets (|Ket>)

I wanted round profiles: airfoils with well connected curves. Today I would call the leading edge a nearly parabolic leading edge, the trailing edge was long but not thin. I added a clear undercut on the leading arm, similar to what Manuel added to his composites. A very peculiar, and important, feature is the undercut on the trailing edge close to the centre of gravity and on the small arm. This lets the boomerang fly farther and adds stability.

The result was a boomerang with a long range, nice hang-time, high spin while hovering, and, most important for me, easy to throw for my style. Years later, I started to build some <Bra | Ket> to sell, it was a very long process and I would like to buy back some of those boomerangs from the throwers who bough them. It is such a long process to make one, test it and give it a decent tuning.

Several throwers started to make their own <Bra|Ket>, Nicolas Rouland made some very nice ones and even created a composite version. Adam McLaughlin made several <Bra|Ket>  moulds and his latest version is widely appreciated.

Since I started experimenting with composite boomerangs, a new composite <Bra|Ket> is on my to-do list. The first attempt was quite disappointing as it was not as performant as my phenolic ones. However, as I hope you will soon discover by making your own MTAs, a successful attempt is always preceded by a fair amount of failures, so back to the workshop!

You can download the original plan <Bra | Ket> here.