Bob Ross and the importance of Happy Accidents

It might sound a bit strange, but I would like to use the famous Bob Ross quote “We don’t make mistakes, just little happy accidents” as the core of what I’m going to tell you about our latest Composite MTA Boomerang project. 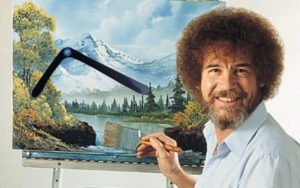 Basically, Bob Ross was trying to tell us that even if things go wrong there might be new opportunities. Something we totally agree with, let me put you in the situation.

Berlin, April 2021. While having a training session with Alex Opri we were discussing the state of the art in MTA equipment. Alex is a very prolific and creative MTA maker as you know, (Check here some of Alex Boomerangs) so I was genuinely interested in knowing a bit more about his view on the current MTAs we were using. Basically, we can say that in tournaments we are seeing two types of composite boomerangs: Wind Sailors MTAs for zero to light wind, and then three bladers for stronger wind.

Then the question arises: It would be cool to have an MTA to throw in between a Wind Sailor and a Threeblader, isn’t it? Something that flies far and high, and with higher tolerance to wind. In fact, this is not new, throwers from all over the world have tried different solutions for a boomerang that fits these requirements. I can mention for example the Paxoline Highlander, the Snake, or the Braket.

With these ideas in mind, we compared our current boomerangs, especially the great Brakets of Andrea Sgattoni and the composite boomerang made by Manuel Schutz in a 3d printed mold.

We got different results, most of them were ok but the idea of creating a new composite derivation was growing strong.

So, we met once again at Alex’s workshop, full of determination to start this new project. Anyhow, at first we didn’t agree on the final shape, so Andrea joined via Skype and sparked a few of his ideas on the project. What did we decide? Well, We chose the Manu shape as a starting point, then added a slight modification on the orientation of the wings.

A few days later, Alex cut 3 paxoline masters and went out testing. He was really interested in their performance so I took a train right away and joined the experimentation. While being there, we also discussed the possibility of altering the airfoil and tune in some of them. Daylight was over, so we stopped throwing that day. Then, one day I received this message from Alex. He was at the field again with the now modified masters, he was having great flights and great range. In the following weeks, we tested them and recognized their potential. Anyhow, Alex was also trying a new Braket master, so he gave me the masters to experiment with.

I went home, determined to mold one of those masters, but which one? So I went to the field once again and selected the best one in my opinion, and then I carved a more radical airfoil on it, The leading edge was also modified completely to keep the spin up, which was the main problem. The result was an outstanding master, a bit floppy due to its thickness but certainly, it has potential.

With everything on hand, I re-sanded the full boomerang and proceeded to build the mold, in hope of getting a decent boomerang out of it,  my hopes of getting a proper boomerang out of the mold were very small. Composite construction is very tricky,  rarely you obtain good results on the first try, especially regarding the tuning, which is the trickiest factor to reproduce. So I just crossed my fingers and jump onto it.

First boomerang out of the mold, named “M” since it is based on the outline shape of Manuel’s boomerang. 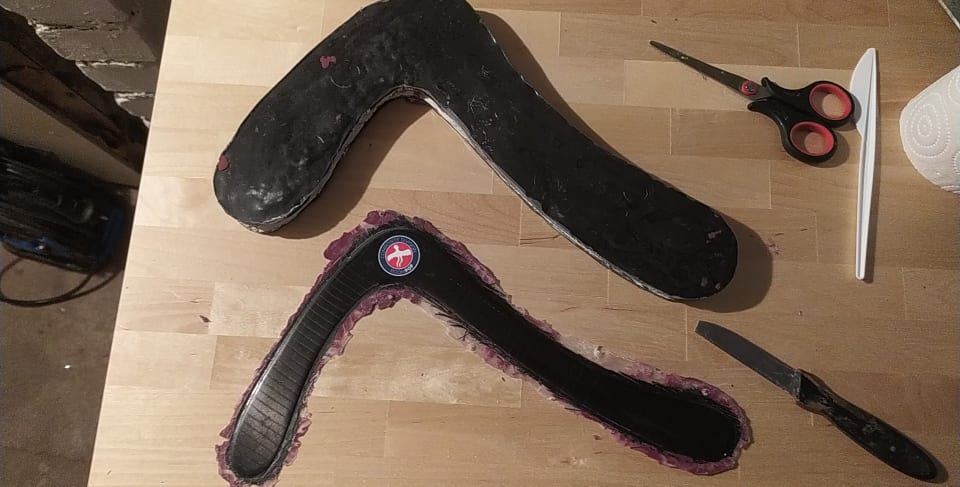 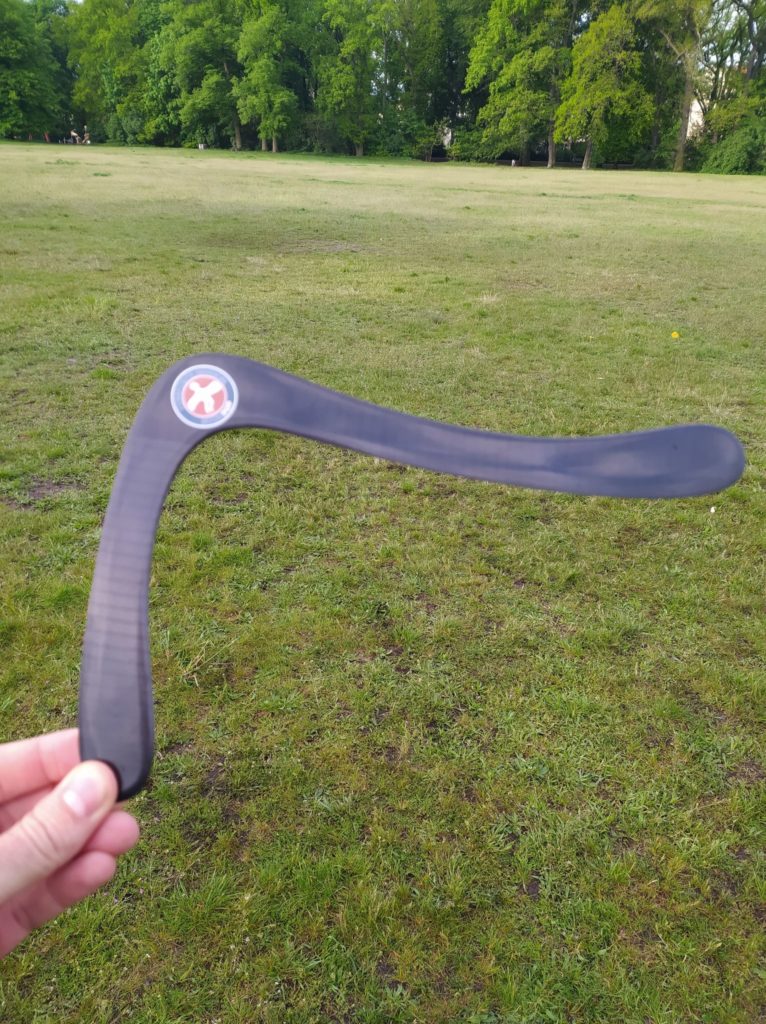 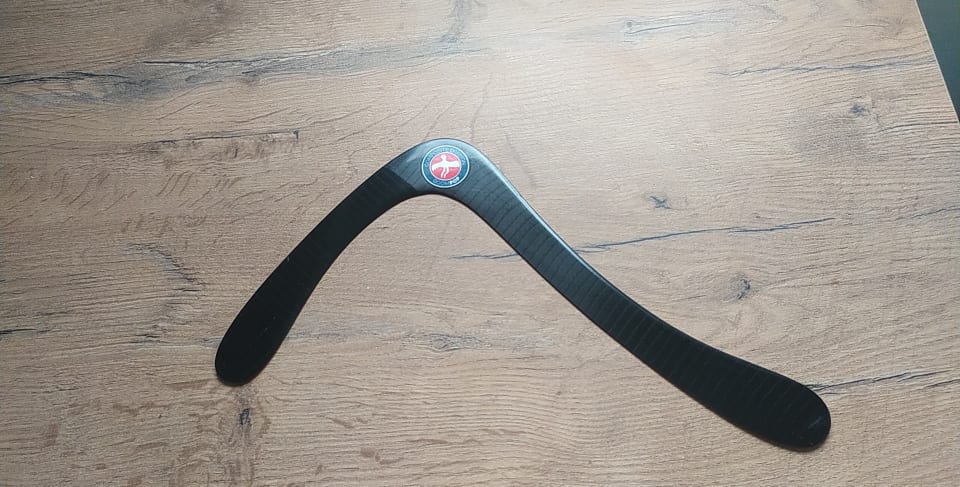 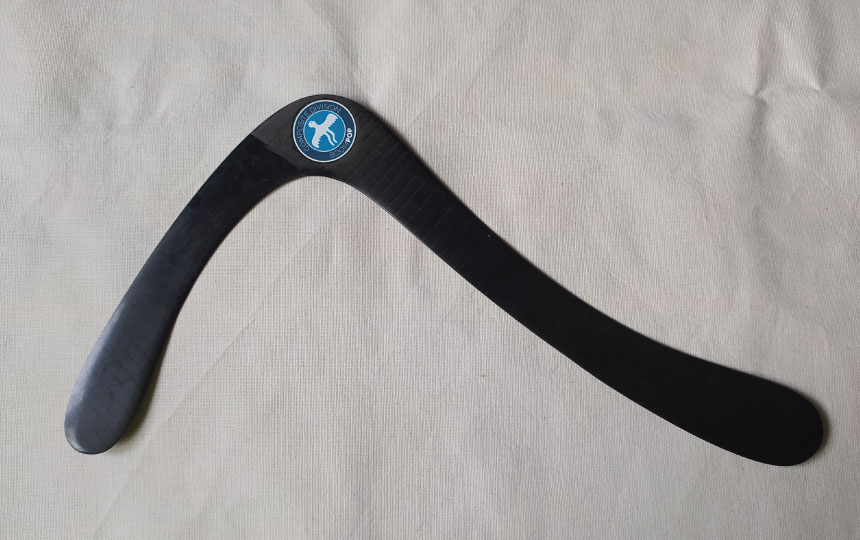 Different prototypes were made in different weights, and weight distributions in order to find the best setup.

The first tests were really promising, I was really surprised, after some minor adjustments in a twist, the boomerang was flying way over +60m,  stabilizing way in front, very stable hover, and great height.

Here you can see a diagram of two different flightpaths which illustrates the flight path of the new model compared to an average Windsailor.

This kind of flight path is really interesting, since it offers a great advantage in competitions where the wind is blowing the boomerangs out of the circle, especially Wind Sailors.

Normally, in MTA 100 you try to throw upwind as close as possible to the line in order to take advantage of the full 100m circle, in zero or very light wind this strategy works, but as soon as the wind picks up you start to see two things: boomerangs being caught outside the 100m circle and/or throwers using three bladers as a safe option.

Threebladers in fact are very useful in this kind of situation, but they don’t hang as long as a two blader MTA.

The following diagram shows a rough comparison of catching points using both boomerangs.

You can see clearly the great advantage of this kind of fligh path (Red) , where you obtain some extra distance for hovering beyond the 100m limit. 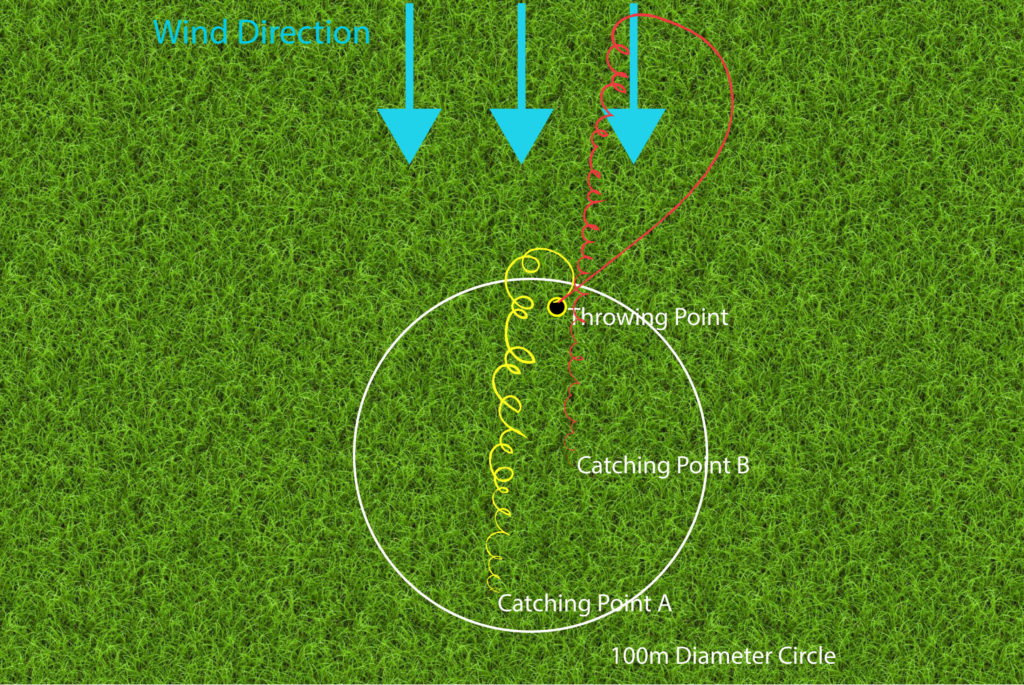 After several testing sessions and adjustments, we found a very good setup, a boomerang with a weight range of 15 -17g. In fact,  even at this weight the range is exceptional, great performance, very sensitive to thermals, but also to wind shifts. This requires the boomerang to be thrown with full spin and power.

The first “Official” test was at the European Boomerang Cup 2021 in Laval, France. The wind was ideal for this boomerang, slight winds, boomerangs being blow away off the circle.  During warmup, I struggled to get the boomerang high enough and some unstable hoverings ended up in a terrible crash which partially destroyed the wingtip of the leading wing. I was shocked, my best “M” MTA was just destroyed. I ran to my bag to find some sandpaper to sand the sharp wingtip, but while I was sanding it I realized that the boomerang was also partially broken near the elbow. Not a good start for me.

In fact, I started my first round with a Wind Sailor throw that crashed badly, 60 m behind me. Then, after a brief conversation with Alex, he said ” Well, try the “M” maybe it still working good after the crash”

Well, I did my second throw with the “M” which got a time of 53,84s. First place at the MTA European Cup. Thank you Alex for your advice.

The funny thing is I got also a couple of extra throws with it over 40s !!! A bit of luck, and a bit of Bob Ross Happy Accidents. 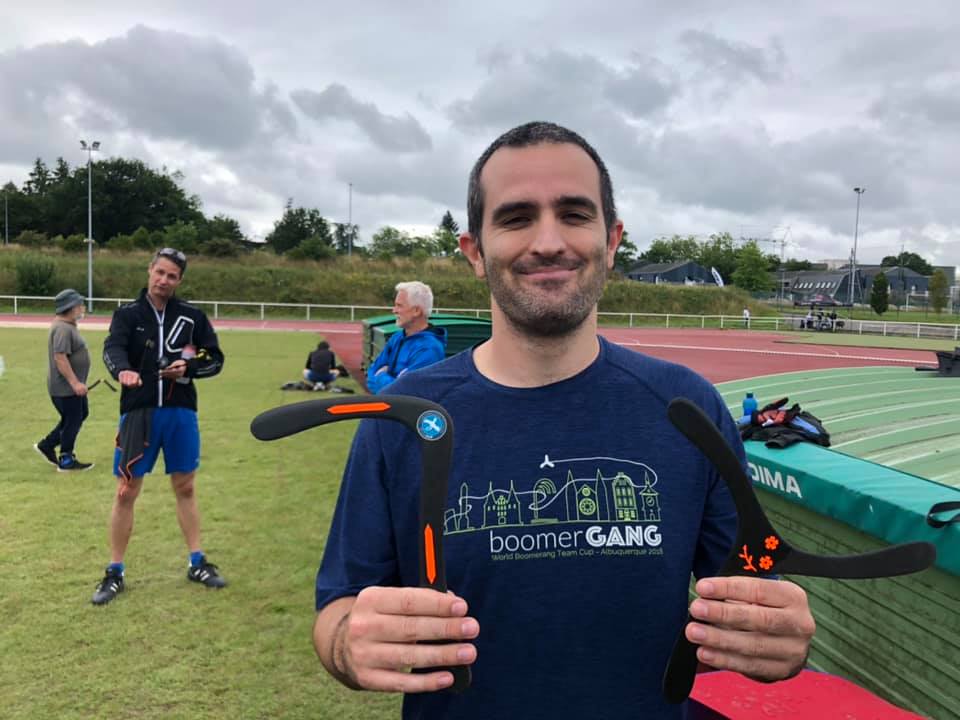 Anyhow, this is not the end of the story, more experimentation with this unique boomerang is happening very soon.