So lift depends on the shape and inclination of the wing deflecting the air flow down, and that´s the principle of action and reaction, or Newton’s Third Law. This not only happens with the air that passes under the wing, but with the one that passes over it, due to another effect called Coanda effect: when surrounding an object, a fluid tends to follow its curvature.

Anyhow, Bernoulli’s principle always holds. It connects the airflow pattern with local pressure along a streamline, but it doesn’t explain the airflow pattern itself. Similar situation to energy conservation of a falling object: It tells you that a falling object gains a velocity of v=sqrt(2*g*h), but it doesn’t tell in what time that happens and along which path (long slope or free fall, same height difference) it happens. With Bernoulli it’s the same.

Do not forget a very important factor: Drag. It is easy to see that if we increase the angle of attack, we not only increase the lift, but also the resistance to movement. So that as a rule, wings have a shape that allows the Bernouilli effect, to get a good lift with at small angles of attack, and therefore, with less resistance.

Angle of Attack on a MTA according to Jonas Romblad

Back in 2004 Jonas Romblad shared his definition of AOA applied to MTA Boomerangs in the Swiss Boomerang Newsletter.

Here I quote the entire text, and add graphics to ilustrate the idea behind it:

“First let us make sure we talk about the same angle of attack. This is generally defined as the angle between the incoming air and the airfoil. In this case. Let us use the flat bottom of the airfoil as the reference.

The AOA is a flight condition and not a geometric dimension on the boom. Compare with an aircraft. At take off and landing they fly at high angles of attackbut in cruise the AOA is small. An Mta flies at low angles of attack during the climbing phase and higher when hovering.

But back to the hovering MTA. Here the (local) AOA is function of radius from the centre of gravity, the spin rate and the sink speed.

Imagine an MTA which is not spining but just sinking straight down through the air. The angle of attack will be close to 90 degrees (plus or minus the twist of the arms) as the wind blows straight onto the bottom of the boomerang.

Now imagine an MTA which is spining but no sinking. The angle of attack will be small and determined by the twist and dihedral of each arm.

Now, the real situation in hover is somewhere between these two extremes.

As the MTA is sinking through the air, the whole MTA has the same velocity downward (pretty obvious, some may say) However, depending on the radius from the centre of gravity, the velocity due to rotation (in meters/secind, MPH or similar) will be diferent. The will travel much longer each revolution than a point closer to the CG.

If one draws a right angled triangle with the velocity due to rotation as a horizontal line and the sink speed as a vertical line, the actual (local) airspeed can be found as the diagonal conecting the two. The local angle of attack is then the angle between the diagonal and the rotational speed line (plus or minus any twist). 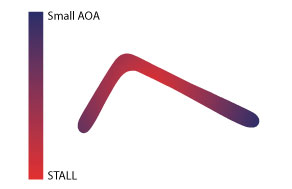 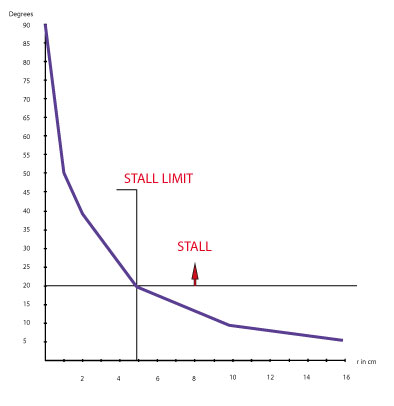 As the sink speed for the whole boom is the same but the rotational speed depends on the the distance from the CG, the local angle of attack will also depend on the radius from the CG. Close to the CG the AOA will be very high while close to the tips it will be much smaller.

Determining the twist contribution exactly is rather tricky as one would have to know what attitude the boom assumes in flight, but using the spherical tune as a “zero” is probably a good initial guess”

In fact, what Jonas explained is very similar to what happens on rotor powered aircrafts as Gyrocopters or Helicopters. When in autorotation the disc is divided into three regions: The stall region, the driving region and the driven region. These regions size vary with the rate of descent, spin and blade pitch.

The driven region is located at the end of the blades, usually the last 30% of the radius. This region produces the most drag, the result is a overall decelaration in the rotation. The driving regions lies between the 25 and 70 % of the radius. This region produces the forces involved in the autorotatión. The inner 25% is considered a stall region, with angles of attack above the Stall angle, causing drag and slowing down the overall rotation of the blades.

The overall rotation speed is the result of the forces in those three regions.
Here you can see how this areas might look transposed to 3 diferent types of MTA Boomerangs: A Windsailor, a Threeblader and a Palm.

This approach can help us to understand the roll of diferent “twist” along the length of the blades in a MTA. As the driven region produce a lot of drag it can handle “Negative Twist” of the blade, reducing the overall angle of attack of the airfoil in this region. 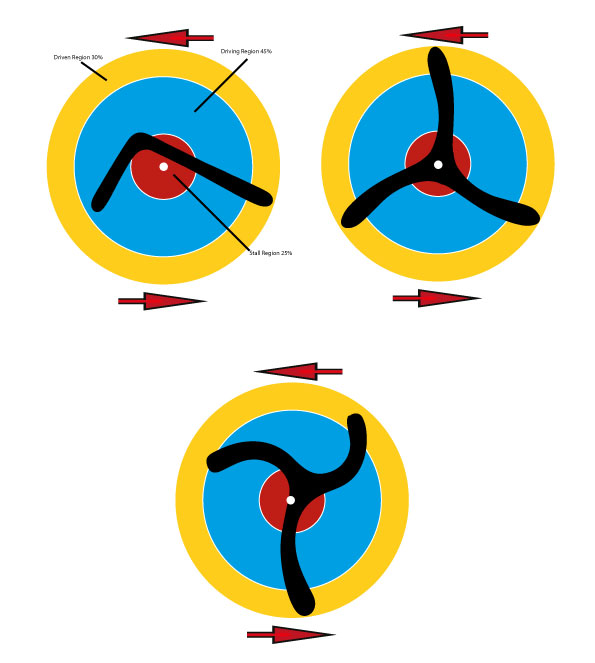 2D airflow across the airfoil

Understanding how the air moves across the diferent wing sections on a Mta boomerang might be tricky, cause we are closer to a 3D Airflow than to 2D. Anyhow here I portrait a “Plausible” 2d airstream across the wings , taking as origin the CG. Remember, this is only for a hovering phase with 0 relative airspeed to the boomerang. 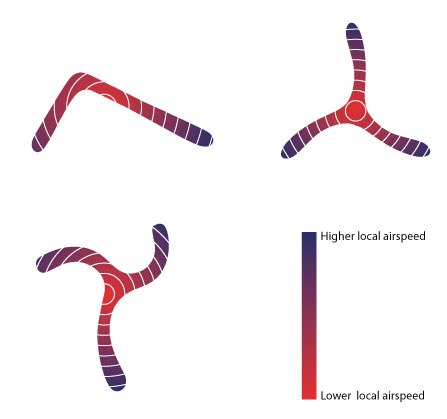 Hovering MTA Boomerangs use gravity as its engine, similar to an gliding airplane. In a airplane we can adjust the gliding path moving the nose up or down. When the plane is pointing down it accelerates because the gravity force is bigger than drag. The constant flying speeds happens when thrust is in equal to drag

Take a paper cylinder, then put the boomerang inside of it, with its center of gravity exactly on the center of the cylinder. Mark where the arms of the boomerang cut the paper. Unroll the cylinder again. What we got? Well, the wing on the leading arm will be at higher angles of attack than the trailing wing. This is what happens with gliding planes too. Increasing/decreasing the angle of the dingle arm is equivalent to apply down/up elevator on a plane.

Important: Remember that the only angle fixed geometrically is the wing in relation to the tail, so the whole plane can pitch up or down to find a new equilibrium. If we turn the tail nose down the plane will pitch up to find a new balance at higher AOA. In conclusion, changing the AOA on dingle arm will affect the way the leading arm operates. 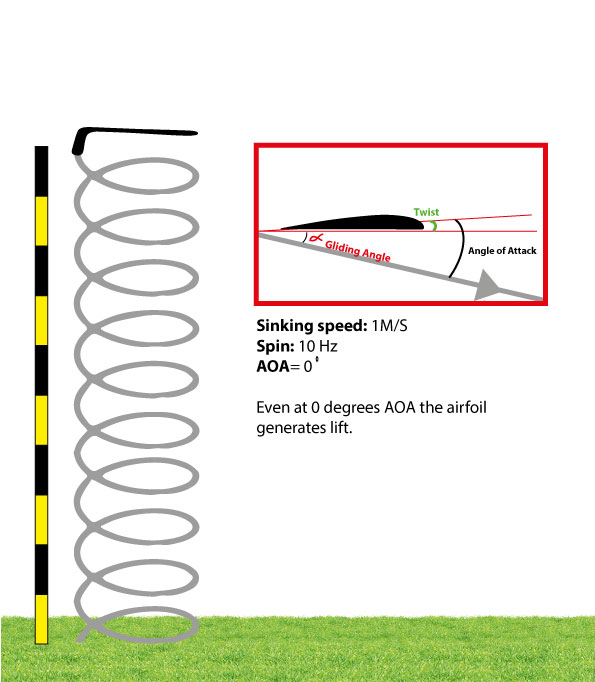 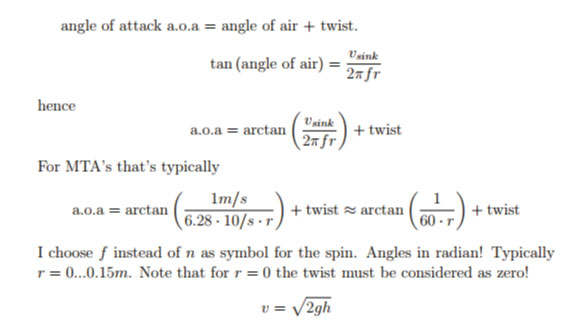 Building and tuning a MTA boomerang can be very challenging. Understanding the aerodinamic concept behind it is not that simple. This article only pretends to point out some information we already have about the physics laws involved in the flight and hovering of a MTA Boomerang.

I would like to thank specially Manuel Schütz who did all the maths and calculations exposed here, but also helped me to develope the article and documentate it.