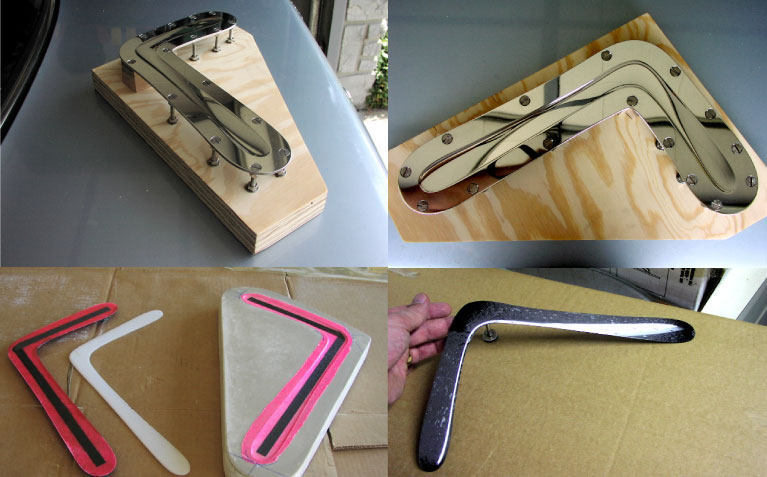 For many years Carl Morris’s website was a lighthouse for all of us who were interested in constructing a carbon boomerang. He detailed all the processes, with pictures, insights, and a step-by-step guide in how to make such carbon MTAs. Carl was also very well known back in the day due to his contribution through the Rad New Booms Group in Yahoo. A place that helped many of us to discover some of the techniques and materials used to build carbon fiber MTAs.

Tell us about your boomerang beginnings.

I was about 12 years old when I had my first experience with boomerangs. My parents had a set of Popular Mechanics Do It Yourself Encyclopedias. One of the projects was a boomerang and I decided to make one. We never did get a return out of it, which was probably for the best, because it was fairly large and made from 1/2″ plywood!

In my late-20s I encountered Usenet News. I was amazed by the variety of groups and decided to look for the most unlikely one I could imagine, and that’s how I ended up subscribing to the alt.boomerang group. I was surprised to find that there were people out there with multiple boomerangs, and I learned where to buy them. My first “real” boomerangs were made by Jim Mayfield of Colorado Boomerangs in 1990.

I had never seen another person throw a boomerang, so there was a lot of trial and error while I figured things out. Eventually, I attended a US Open tournament in Delaware, Ohio. When I parked I was excited to see a whole field of people throwing, Chet Snouffer was doing fast catch warmup right in front of me! I had no experience with competition boomerangs, so it was amazing to see what they did in skilled hands. I met many friendly people at the tournament and learned a lot.

I enjoy projects so eventually I started making my own boomerangs. I’m left-handed, so sometimes the only way I was going to get a certain design for throwing was to make it myself.

How was your first experience with MTA boomerangs?

I ordered a couple  MTA boomerangs, Ted Bailey’s classic design and one from AboSteve, both of them were wood booms. This was in the period where I had not seen anyone else throw a boomerang, much less an MTA. A lot (I mean, a LOT) of trial and error (mostly error) followed. I spent hours throwing them at the sky and having them come back down like lightning bolts: rejected! There was nothing wrong with either boom, I just didn’t know how to tune or throw them. Later, when I saw the MTA event at the tournament I got new ideas to try and my results improved.

why do you find them interesting?

Projects with lots of interesting bits are difficult for me to resist. I enjoy working with others to solve problems. I have always had an interest in things that fly. Working on making a composite MTA involved all of those.

Can you tell us a little bit of the process you followed which led to the construction of the tunable aluminum mold?

I read all I could about MTAs and saw the article Jonas Romblad did on his mold. Since I didn’t have enough experience to select a good tuning, my goal was to create a mold that could be adjusted. I tried making molds with plaster but it was too hard to iterate and the mold was not durable. I decided to try making a mold from an aluminum sheet thin enough to tune using a framework.

I started with the outline of a Jonas. Using a CAD package called Rhino 3D, I created a “flat” outline that was very similar. I created airfoil cross-sections to use as control points at various locations, then “lofted” a surface through them. I tried for an airfoil that was a little thinner than a Jonas and more “pointy” on the leading edge. That gave me a model, now I just needed to get it machined. 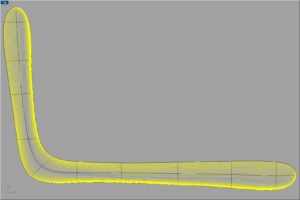 I tried local companies, but when they saw that the part didn’t have a single flat spot on it they were not interested: too complicated. I had been in touch with Jonas throughout and after some discussion he generously offered to help with the machining, I still remember the day THAT package arrived! 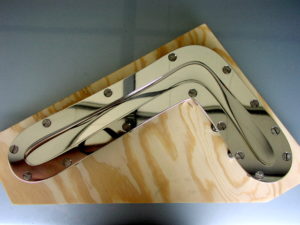 Once I received the machined mold it still had small ridges that needed to be smoothed by hand sanding. Progressively finer sanding was required to polish it, with Simichrome paste for the final touch. I made a framework of plywood that was 1.5″ thick and used machine screws to adjust the height of the mold at different places. 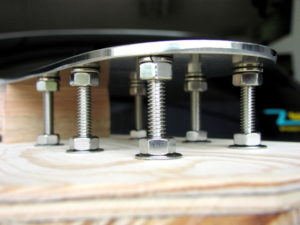 Would you recommend Rohacell for MTA boomerang cores?

I wanted to try Rohacell because it has a very fine structure, and good material properties as far as foam goes. It is used in the aerospace industry where weight is a concern. Before mounting the mold on the framework I used it to create a few cores in an oven. It made for a light MTA but traded off too much stiffness and adds more fabrication work. 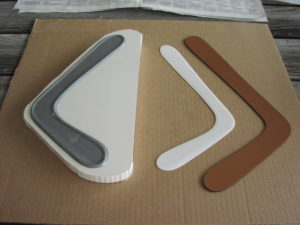 What can you tell us about your tuning method? should the ideal MTA have a spherical tune?

Others are much more qualified than I am to speak to this question. I will offer that all of the good MTAs I’ve measured seem to approximate a sphere of some radius. It’s not a bad starting point. Something more elliptical (a squashed sphere) might be worth experimentation as well. 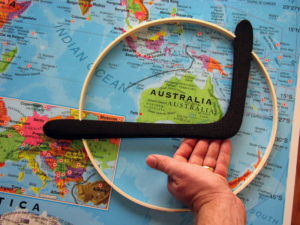 Talking about different types of MTA configurations. What is your favorite and why?

I’ve always liked the Quirl (Axel Heckner), I think it’s the forward rake on both arms, very distinctive. I made a few in 1.5mm paper phenolic that performed well.

Any advice for someone who is starting in MTA boomerangs?

Go to a tournament. Find a mentor. It will save you time and wear on your arm and booms!