Maximum Time Aloft MTA boomerangs are very popular in todays boomerang scene, their flight is spectacular, and its throwing reacquires a deputed technique.

The history of hovering MTA ́s leads to aboriginals, which used to craft small boomerangs made out of seeds and weeds to throw them into the fire. Those boomerangs would float into the hot air column and started gaining height. 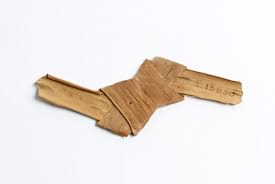 The earliest reference to modern MTAs dates back to 1895 and the United States Patent #532,233 by Frank Saxon who crafted a laminated boomerang with an asymmetric shape at this time. Even though he describes the flight of this boomerang as a regular returning boomerang, not like a hovering boomerang, it was the first approach to longer flight paths. MTA as a boomerang event was introduced in the late seventies.

The British Boomerang Association Newsletter included it in 1985 the description of a new event, which they called “duration”. This event consisted of three throws with a catch required. First flights around that period were about 20 seconds long only. In Europe, Willhelm Bretfeld from northern Germany started to experiment with this discipline resulting in flights of 30 seconds being achieved. Bretfelds experiments were first published in the Boomerang Association of Australia magazine in 1982. From there on building asymmetric boomerangs for this event became a trend. 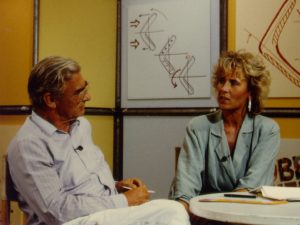 These early MTAs were big, thick and heavy, sometimes even ballasted with lead, and with no aerodynamically tune. A basic flat tune was the only approach. These boomerangs tend to stay in the air longer not because of soaring properties, but due to its large moment of inertia. These European boomerangs arrived to the U.S.A thanks to Barnaby Ruhe, as well as Larry and Peter Ruhf. Peter himself was the first one to achieve a flight over a minute in 1984.

This started a technology race which was lead by NASA engineer Ted Bailey. Bailey introduced smaller and lighter designs and his boomerangs became a trend in the international community. Using his knowledge as aeronautical engineer Ted Bailey experimented varying the weight, wing ratio, chords and aerofoils. This experiments leaded to big improvements in hang times. In the first years, Bailey lost more tan 50 boomerangs which flew away on thermal currents.The most successful design he did was called Windsailor.  Although his specialty was long distance, Oscar Cuartas was the pioneer of MTA’s in Latin America. He experimented creating his own plywood and composite materials since they were not easily avaliable and by the end of his life it was one of his favorite boomerang events.

In the mid 80s  greatt advances where made in MTA boomerang design. Rod Jones was a pioneer of MTAS in Australia. Rod used a spherical jig to laminate his plywood MTAS. This process of “Spherical tune” was also used in the 70s by  Al Gerhards while tuning his striplaminated hooks.

Another great name for the boomerang sport was Axel Heckner, his approach to develope new boomerang designs was revolutionary. He designed one of the first three blader Mtas, but also designed a milestone in boomerang history: the paxoline Quirl Mta.

This design is crutial for the history of modern boomerang sport. Lately de Quirl was used as a Long distance shape with outstanding results.  Quirl was modified by Manuel Schütz into a Megaquirl, a Megaquirl Pathfinder, and finally into the Voyager design which was used to set the World Record of 238m. You can check the evolution of the Voyager design in Manuel´s Blog

Around 1987 a new name appeared in scene: Jonas Romblad. This Swedish thrower got tired of his boomerangs not staying in tune and started experimenting with composite construction for MTAs which was certainly not an easy task. Wood, which was the common production material back then, can be affected by moisture and get distorted easily. In fact, it shrinks about 14% as it goes from green to “dry”.

This was a real issue for boomerang throwers back then. Jonas decided to create a new kind of MTA boomerang, made out of a different material which is not affected by temperature and humidity. He took a well known MTA boomerang shape, the windsailor created by Ted Bailey, and built a boomerang out of Carbon Fibre and Epoxy Resin. Jonas spent 3 years into developing his first Composite Mould, which was released in 1991.

The Jonas boomerang has a sandwich construction type. Each boomerang is made out of several layers of carbon fibre, epoxy and a lightweight core, usually made out of balsa wood or microbaloons.

This new MTA was the first to stay in tune, not deforming in certain weather conditions, and has a perfect shiny finish. It was very light and stood in no comparison to wooden MTA Boomerangs. Composite materials are, even after 20 since the discovery, still the most desired fabric for MTA competitions. Several throwers tried to build this kind of boomerangs recently, including: Georgi Dimantchev, Manuel Schütz, Javier López, Thiago Nicacio, Alejandro Palacio, Andrea Sgattoni, Tobias Jakob, Hernán Felipe Arboleda, Adam Maclaughlin, Martin Laslett and Hiroyuki Murata.