Eric Darnell and the TriFly Boomerang

How did you got involved in boomerang throwing?

I grew up in a flying family. My father owned 1/20 of a J3 Piper cub and I flew every weekend from about age 2 1/2. I started making gliders about age 4 and by age 12 I was quite good at it. Many were my own design out of rice paper and balsa. It got so I would spend a week making a glider, take it out, rubber band launch it, and sometimes it would just leave on the wind and I would never see it again! NOT very rewarding for a 12 year old. I decided to make wings that came back. I had seen pictures of boomerangs in the encyclopedia and figured it couldn’t be too hard. It actually took me a year [age 12] to make consistently good boomerangs. Two problems slowed me down. First I kept trying to make the drooped nose airfoils that were so successful for me in gliders and second plywood in 1956 was 3 ply 6 mm and by the time you carved an airfoil it was so weak it broke after a couple of flights. I finally figured out a rounded underside on the leading edge was much more forgiving and the boomerangs lasted longer. I solved the plywood problem by using natural elbows that I harvested from the Pennsylvania  woods around our house.

How was the boomerang “scene” back then?

The boomerang scene was nonexistent. I didn’t meet another maker till 1974 at Ben Ruhe’s Washington gathering.

What do you think is the impact of the TRIFLY in the boomerang world?

I spent 15 years designing the Tri Fly. 1975 to 1990. I hand carved over 100 prototypes out of polypropylene. I experimented with 1 mm to 6 mm thick material for indoor and outdoor models. I tried up to six wings but settled on three as the simplest solution.
I made a wooden version out of 6 ply 3 mm baltic birch called the IG Rang in the late 80’s that introduced many people to the “over/under airfoil”. Undercut leading edge and normal trailing edge so it was invertible, you can throw it right side up or upside down and since the plywood had a natural bow you had positive dihedral right side up for trick catch and negative dihedral upside down for fast catch!
I tried traditional airfoils, with ridges and without, different sizes, flat bottomed and under camber, with no holes and with holes, etc. All the models had bulbous tips for weight distribution and large radius for safety.

Tell us how was the process of developing your plastic boomerangs, especially the Trifly ( Any picture from this period, master boom, molds, experiments)

The biggest breakthrough for me was when I realized you didn’t need an airfoil to fly. You could use angle of attack instead and gain the advantage of drag being built in because angle of attack is less efficient than a true airfoil. That means coming back to you it is slowing down and easier to catch It enabled me to design the Try Fly with under camber and mimic a turbine blade shape when inducing angle of attack.

My wish list was; ambidextrous, half the weight of the poly Pro Fly 74 gm [Tri Fly is 45 gm], handle wind better than Pro Fly, uniform wall thickness for easier and less expensive molding, easy to catch with mass in the center of rotation, and level the playing field so anyone could buy one and compete.

Tell us the story of the “GLOWIE”? How many of those were produced? Why so special? any clue about what kind of material is inside?

The “old glowie” was a failed night glow material left over at my original molder. It was polypropylene with not enough glow for the project they had in mind so I tried it as a night glow and was equally disappointed.I think we made a total of 200 between Tri Fly and Pro Fly. 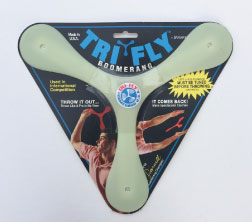 Can you explain to us the strengths and potential for the competition of the different materials used in the TRIFLYS?

How many TRIFLYS have been produced until now?

Over 1.5 million Tri Flys have been produced