The value of the boomerang to man today is its complexity that combines intellectual and physical stimulation. It requires agility and strength to throw and catch it successfully. Intellectually the boomerang is a highly advanced engineering piece. It combines the understanding of aerodynamics and requires the thrower to understand basic rules of physics.

Boomerangs were used as a recreational tool throughout the history and started to become an organized sport in the 1970´s. The Boomerang Association of Australia was the first official formed organisation set up on September 11th 1969 in Melbourne. The fascinating sport of boomerang throwing has many pioneers. The Janetzki brothers, Oscar Cuartas, Wilhem Bretfeld and Benjamin Ruhe are only a few important names of visionaries of their time. They are people who found their passion in the boomerang sport as throwers and revolutionised it with their craftsmanship. 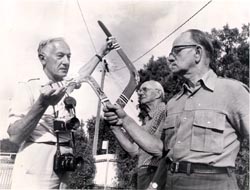 Les and Arthur Janetzki advanced the art of building boomerangs in Australia in the 1960´s by creating unique shapes out of plywood. While Les was the boomerang shaper, creating them over a long timespan and with high precision, Arthur would decorate them with unique art. They refrained from selling their pieces, but rather gave them to other throwers as presents during tournaments. Their boomerangs are one of the top collector pieces today and mark milestones of the modern boomerang history.

Whilst the Janetzki brothers developed their interest fairly late in their life after their retirement, Oscar Cuartas, today known as a pioneer of boomerang sport in Latin America, already started crafting in the 1940´s in Colombia. Due to limited material availability he resolved to the usage of indigenous materials such as tropical wood and merged it with other elements like aluminium cores or fiberglass. His excellent craftsmanship and his persistency of throwing nearly everyday during his last 30 years brought great value to the sport. His extensive knowledge about boomerangs, their aerodynamics and how meteorology affects their flightpaths was always shared with others and especially with new throwers.

After his passing in 2005 the Oscar Cuartas Boomerang Foundation was established to preserve his legacy and to honour his wish to spread, innovate and support the sport of boomerangs.

Boomerangs at the Smithsonian

Simultaneously to the efforts of the Janetzki brothers and Oscar Cuartas, the American movement was started by an article about boomerangs in the Scientific American Newspaper 1968, that earned high interest and brought popularity to the sport. Benjamin Ruhe discovered the tools whilst working and living in Australia. Upon his return to the United States he started sharing his knowledge with friends in Washington and went on producing boomerangs. After his newspaper article gained popularity he started hosting yearly boomerang workshops sponsored by the Smithsonian Institute to teach construction and throwing. The movement grew bigger through various more news coverages and small competitions held at the Smithsonian Campus and made Ruhe one of the founding fathers of the modern boomerang history in America.

1981 marked the year of the first international competition when a team of ten boomerang throwers from the united states went to Australia to compete against them in their native sport. They succeeded and formed the United States Boomerang Association in 1982. Two years later the Australian team visited the successors in their country for a rematch. From there on international team championships were evolving with the first official world cup in 1987 registering five American and two European teams.