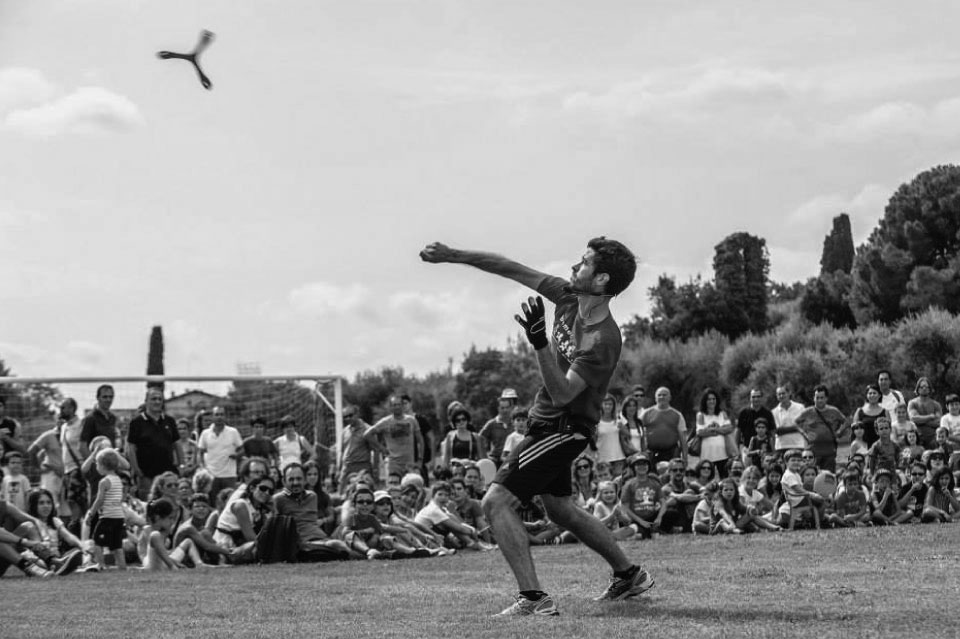 I have always been fascinated by flying objects, kites, planes, helicopters and of course boomerangs. I was a child when I got a red plastic boomerang that could never come back.

When I was 13, I was with my family at a festival in a small village in the middle of Italy. A man was selling and throwing boomerangs in the small square of the town: It was the first time I saw one coming back, I was hooked. I went home with the head full of all the boomerangs I saw and tried to build one by myself. I made a three-blader using four pieces of cheap plywood: I threw and caught immediately!

Five years later, Autumn 2001, I got in contact with Giovanni Lorenzoni, a very good Italian thrower and two weeks later I took part to my first tournament, I won MTA with a borrowed wooden copy of a Ted Bailey: I was hooked again.

I never stopped making and throwing boomerang since. Some of my achievements include the second place at the European Championships in Denmark 2013, four times in the top 6 positions at the World Championship, World Champion in Accuracy (Australia 2014) and Endurance (Germany 2016), twice first place at the World Boomerang Team Cup (Brazil 2012, Australia 2014) and 3rd place in the 2016 Cup in Germany with the BoomerGang International Team and GLORP World Champion (Germany 2016).

I fist tried to develop a composite version of my <Bra | Ket> MTA for the first time around 2010. In 2016 I decided to start again to produce composites MTAs after receiving a great masterclass by Manuel Schütz at his place in Bern.