This year marks 20 years since the  238m WR Throw by Manuel Schütz. An astronomical score that remains in the imaginary of many throwers and that nevertheless is elusive for many.

Kloten – 1999, a small town near the Zurich airport was the place (now mythical) where this spectacular flight took place. It is, for this reason, we decided to investigate a little more about the details of this legendary flight.

20 years of the 238 WR throw now, what do you remember from that competition?
At the beginning, we were wondering if there are 11 Throwers competing. 11th thrower arriving: Jürg Schedler, we were saved.

Do you remember the throw? How did you feel?
Yes, the only thing I can’t remember was which throw in the second round of 5 throws it was. Just in the first round, I scored 212m, so I knew that on this day, even more, is possible. I remember how it went out and how Jürg as head spotter was at the right place. He barely had to move because I had an entire series of very good throws peaking at more or less the same place. At the furthest point, the boomerang was pushed slightly more upwards than the throws before which were crashing not far in front of the gate. This one came back doing a very long S-shaped curve and just made it back within the gate. It crashed just 2m behind the line, only a few meters inside the gate.
Only after measuring (it took forever…) I realized what has happened. I thought that maybe 220m was possible, but 238m? I was very excited, similar to when I broke the WR just two months before in Tentlingen with a 192m throw in round 1, ending with 207m. 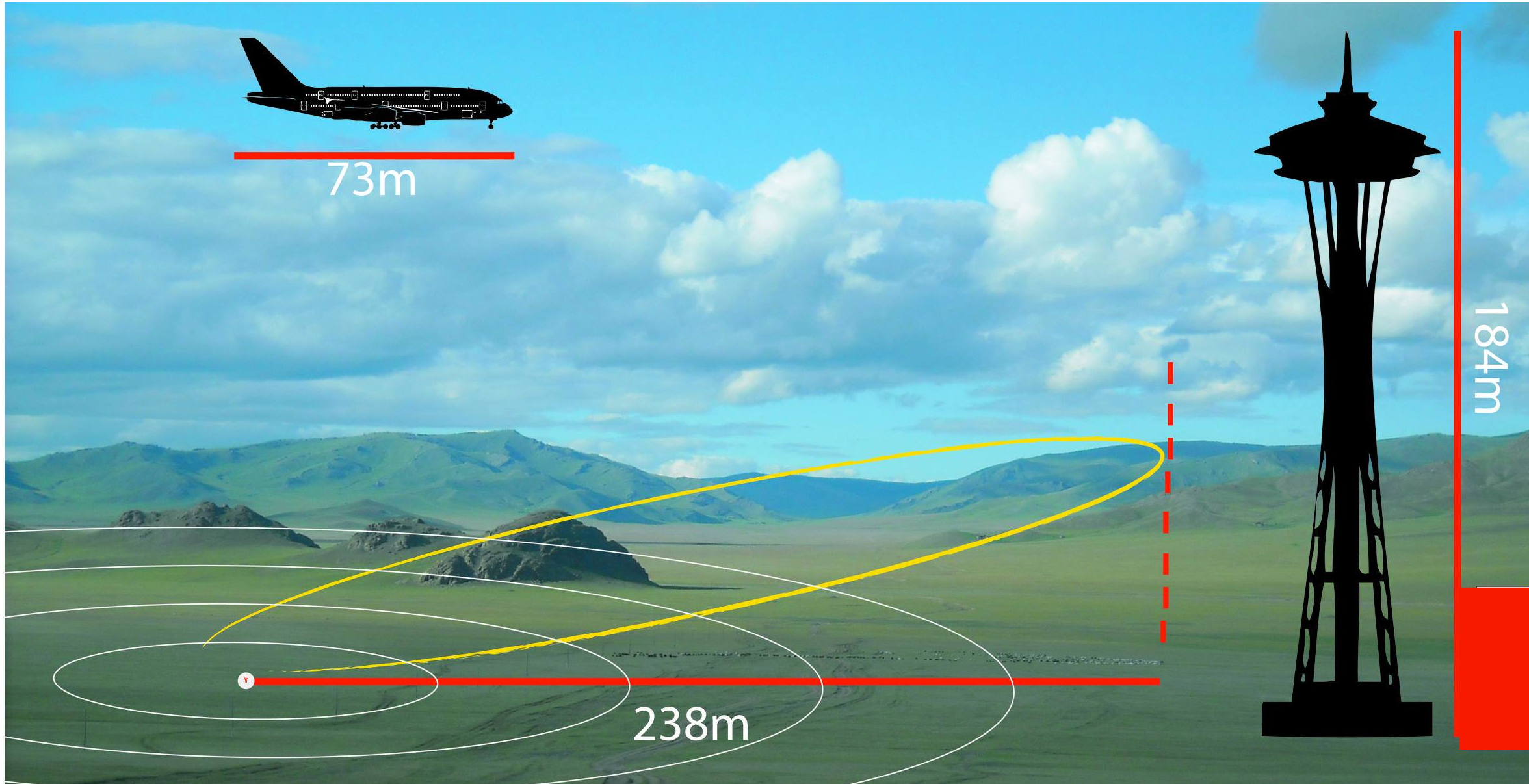 How a 238m WR boomerang Flight looks like? Well, here a scaled overview of it. More than 3 times a A380 airliner. 2 and quarter of an official soccer field.
Longest javelin throw: 104m
Deepest apnea dive: 214m
Ps. yes, inside the white dot is an scaled human

Were you surprised by the final range? Or you were on similar ranges during training?
I didn’t really measure during practice but I knew from a tournament in Haguenau (1998) that over 200m is the goal. A 221m flight barely missed the gate. They measured it nevertheless to get an idea. I was surprised by 238m, but if you recall that the distance achieved is roughly proportional to velocity squared it’s obvious that 238m vs 220m (ca 10%) ist, not such a big difference. Even more, because other throwing parameters have much impact like the layover.

Can you tell us about the boomerang? Material, weights, airfoil, tune used?
Developed from Axel Heckners Megaquirl, Material was brown 3.1mm GFEC (I think I received the sheet from Rolf Schlayer). The airfoil is very close to symmetrical. When I started with Megaquirls I realized that almost all the time the required correction was “less lift here” and “less lift there”. The airfoil approached more and more to a symmetrical one. Similar to NACA0008. 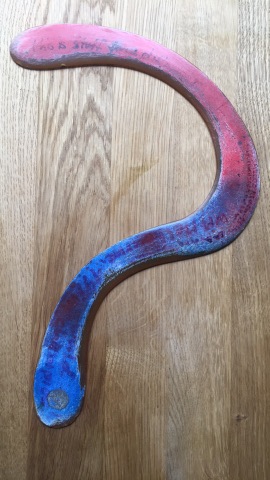 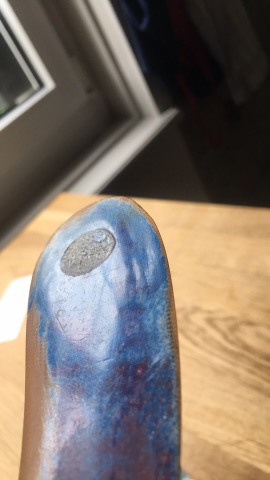 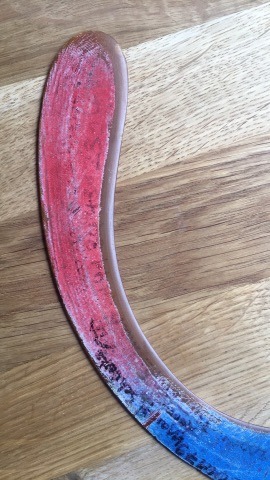 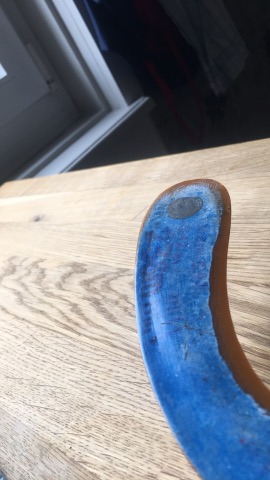 I introduced the concave trailing edge due to a misconception. I thought that this would reduce drag because the upper and lower streamlines come together more “smoothly”. Maybe 5 years ago when I studied airfoils I realized that a key factor is the “pitching moment”. For a consistent flight over such distances, this pitching moment should stay close to zero. That’s what this sort of trailing edge does (Georgi Dimantschev, thanks for the information you gave me in the 1990s! It took me a few years to understand them).
Lead weight: I think 15mm diameter, total weight 71g. It works fine without lead weight, the range is a bit less in that case because it tends to float more at the return.

Do you think is your more solid WR?
Definitely. Records are there to be beaten, but I think Endurance and even Fast Catch or Trick Catch will be broken earlier than LD.

200m Club. At the moment a very lonely club. Why nobody had joined you in all these years?
That’s a big surprise for me. I expected a few throwers getting there. I have no explanation except that it must be the throwing parameters.

Do you consider the Voyager the ultimate shape for LD, or there is room for a more efficient shape?
At the moment yes. But that may change in the future. Remember the times where “add more weight” was the guideline?

Hows the results with the composite version of the Voyager? Best results with it?
The longest flight was probably in Mallorca 2015 at the EBC: 197m. The idea is to have some backups. AT important moments or if nothing else works I’m still using the WR model.

Kloten is now a very famous LD field because of this WR throw, anything special there regarding wind conditions?
The only special thing is that airplanes are approaching  ZRH airport. Sometimes you can hear the vortices from airplanes even minutes after they have approached. I once hit a vortex with an MTA maybe 2 seconds after release. Funny: Suddenly the MTA “disappeared”. Then I saw that the flight path continued with a few meters lateral displacement.

What’s your expectation for the years to come in LD? Is it possible to attack this WR?
Matches the general expectations. No throwers in their 20’s right now, but I expect a lot from throwers like Matéo Guerrero. Sure it is possible to attack the WR. We are in the same situation as we were 1996. Noone believed that 149.12m by Dufayard can be beaten. 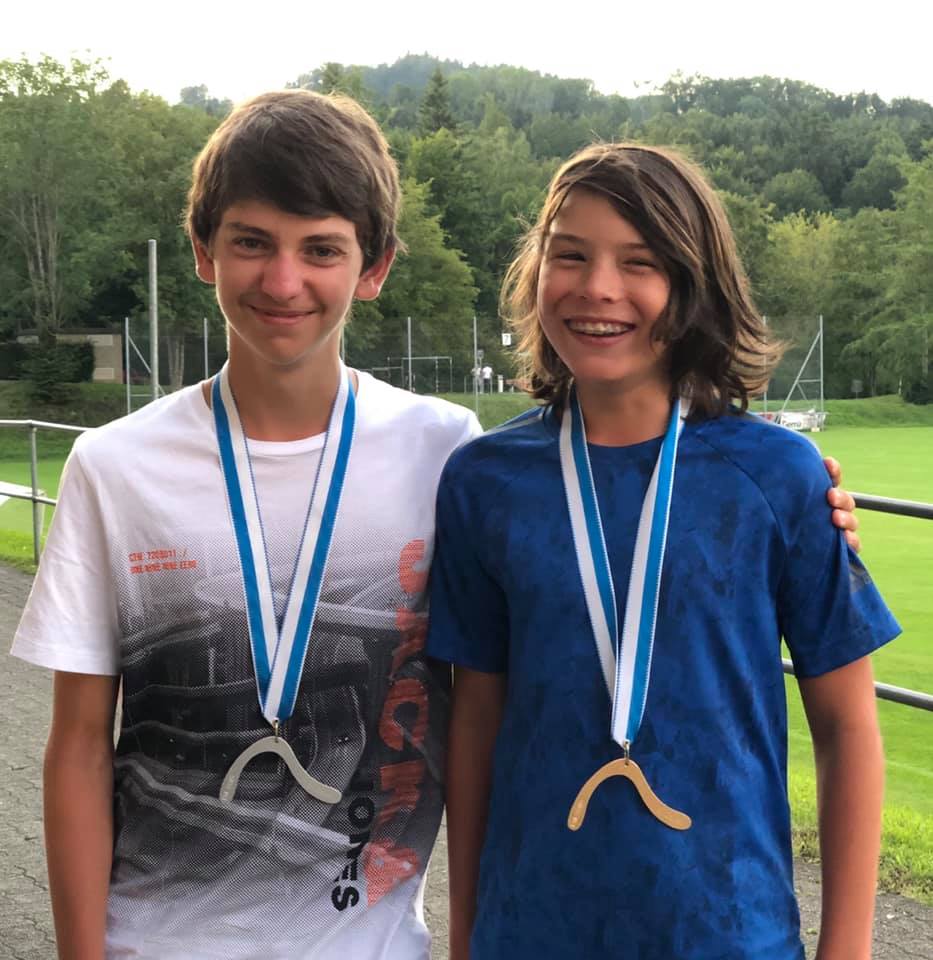 (Matéo Guerrero and Anthony Gelin during the LD award ceremony in St. Gallen 2019, they both joined the 100m club)

What do you think about the LD scene right now?
A crazy lot of people, maybe even a bit crazier than boomerang throwers in general? Who else would be willing to search for hours or days for a lost boomerang. An important part of the boomerang family!

Any advice for beginners in LD?
Start with thinner boomerangs, 2mm carbon or even better 2mm paxolin. Shape: Whatever Voyager-like you want, just reduce the wing width (=chord) a bit. The range can be 50-80m, it’s about understanding the flight path. The airfoil doesn’t have to be that sophisticated for such thin boomerangs. The Bordeaux crew around Michel Appriou has the best experience for beginner LD boomerangs. I saw them using a 1.5mm carbon Voyager, edges just rounded (!). Apply tuning to learn by yourself how it affects the flight (better with paxolin. Or even 3mm wood). Vary your throw: Higher, lower, more/less layover and observe precisely how the flight path changes. For thicker boomerangs: Instead of tuning you can then correct the airfoil accordingly. Example: More “positive twist” means: Remove material at the trailing edge on top. So: Never sand a new LD boomerang “razor blade sharp”. Btw even in finished state it shouldn’t be sharp as a knife.